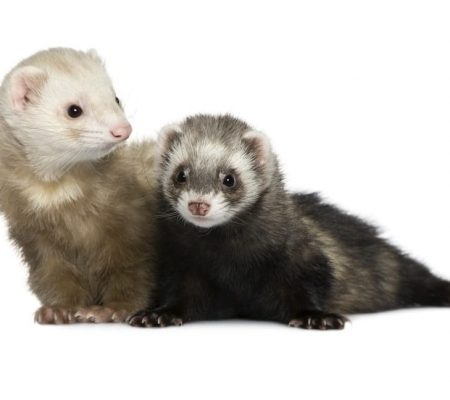 Active and mischievous, young ferrets make great pets for people who have time for playful companions that require time outside of their cages every day to run around and burn up what seems like endless amounts of energy. With an average lifespan of 7-9 years, pet ferrets do slow down somewhat as they age; however, middle- to older-age ferrets still need daily out-of-cage time to exercise, so that they don’t put on excess weight. Pet ferrets who spend all day in their cages tend to overeat from boredom and become obese.

As true carnivores, ferrets should be fed a high-protein, moderate-fat, low-carbohydrate diet. Year ago, pet ferrets were fed cat food, but now diets are commercially available that are made specifically to meet the needs of ferrets. Ferrets digest food quickly (typically within 3-4 hours), so they appear to eat and defecate constantly. Because very young ferrets and certain older ferrets with pancreatic tumors (called insulinomas, which are very common) can easily develop hypoglycemia (low blood sugar), ferrets should be fed a few small meals a day or allowed access to dry food to graze on throughout day, as long as they aren’t becoming overweight. If a ferret is eating a high-quality premium diet, supplemental vitamins are not necessary. In fact, some of the vitamins marketed for ferrets actually contain a great deal of sugar which may be detrimental to ferrets, especially if they have pancreatic insulinoma tumors that produce excessive amounts of insulin in response to sugar consumption and which can cause ferrets to become hypoglycemic. While ferrets do enjoy sweets, dairy products, raisins, fruits, and vegetables, these foods should not be offered, as they may not only contain excess sugar, causing hypoglycemia, but also lead to digestive upset and diarrhea. Small, high-protein treats, such as a slice of lean cooked turkey or chicken, is fine as an occasional ferret snack.

As ferrets age, they are prone to developing certain diseases. Common conditions of pet ferrets include intestinal foreign bodies, hairballs, gastrointestinal infection with parasites/viruses/bacteria, heart disease, and various tumors. Diarrhea is common in ferrets and is not a specific disease, but rather a sign of a gastrointestinal problem with several different potential causes. Diarrhea in ferrets may be black (suggesting digested blood), green, mucus-like, granular, bloody, or watery, depending on the cause. Ferrets with diarrhea may not appear visibly sick at all, or they may have a decreased appetite, vomiting, weight loss, weakness, and lethargy. Several conditions in ferrets can result in diarrhea. Internal parasites, viruses, and bacteria all can cause diarrhea in ferrets. In addition to infections, foreign objects ingested by ferrets, as well as excess ingested hair (forming a hairball), also can cause diarrhea. Foreign object ingestion is a common problem in ferrets, especially in young ferrets less than one year old. Ferrets love to chew, so all plastic, rubber, and foam objects must be kept out of their reach. If a ferret swallows one of these objects, it may cause a gastrointestinal obstruction that may require a surgery to treat. Excessive hair ingestion, too, can form a hairball that also can lead to gastrointestinal obstruction. This is common when ferrets shed their thick winter coats or when they have tumors in their adrenal glands that produce hormones that cause hair loss. Ferrets with gastrointestinal obstructions from foreign objects or hairballs may have not only diarrhea, but also decreased appetite, vomiting, lethargy, and weight loss. Ferrets with these signs should be checked out by a veterinarian as soon as possible.

Several tumors are common in pet ferrets. These include tumors of the pancreas (called insulinomas), adrenal gland tumors, mast cell tumors of the skin (which cause itchy skin crusting and scabs), and lymphosarcoma/leukemia (cancer of the white blood cells in lymph nodes and other internal organs). Ferrets with insulinomas continue to eat normally but often lose weight and become weak, wobbly, or drag their hind legs when they walk. Ferrets with adrenal gland tumors commonly lose hair and have itchy skin. As a result of excess hormone production by the cancerous adrenal gland, female ferrets with adrenal disease may have swollen vulvas, and males may strain to urinate secondary to enlargement of their prostate glands. Lymphoma can cause very non-specific signs in ferrets, including weight loss, lethargy, and decreased appetite. Sometimes their lymph nodes (particularly under the jaw, in the armpits, or in the groin) can become visibly or palpably enlarged. The spleen also may become enlarged, making the ferret’s abdomen appear swollen.

Heart disease is also fairly common in ferrets. More common in ferrets after age three years, congestive heart failure may occur due to cardiomyopathy (disease of the heart muscle). Ferrets also are susceptible to heart infection from the parasite that causes heartworm disease in dogs and cats. Clinical signs of heart disease in ferrets include weakness, loss of balance, decreased appetite, lethargy, trouble breathing, coughing, or swelling of the abdomen from retained fluid. Ferrets with any of these signs should be examined by a veterinarian right away so that the ferret can be treated with proper cardiac medications.

Any lump or bump appearing on a ferret should immediately examined by a veterinarian. Treated early, many types of cancers can be successfully managed. Since early detection is critical to survival, every ferret should have at least a yearly examination; ferrets over the age of three years should have a thorough check-up including blood testing, fecal analysis for parasites, and possibly x-rays. Preventative medicine and proper diet are key to ensuring ferrets remain happy, healthy, and long-lived.