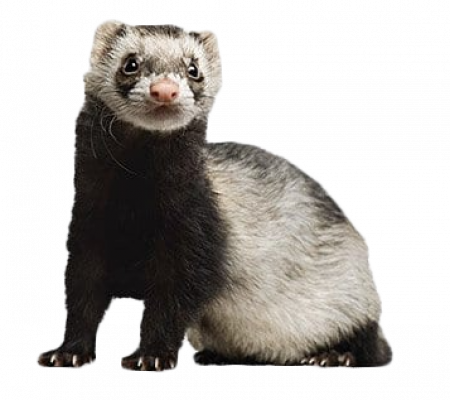 Proper Nutrition For Your Pet Ferret

Ferrets are carnivores (meat eaters) that in the wild typically eat rodents, birds, and rabbits. Pet ferrets should be fed commercially made, high-protein, moderate-fat, low-carbohydrate pelleted diets formulated specifically for ferrets. Feeding pet ferrets raw diets, such as frozen thawed rodents, isn’t recommended, as their gastrointestinal tracts haven’t been adapted like those of their wild counterparts to safely digest these raw foods. Like people who ingest raw meat, pet ferrets can become infected for Salmonella and other bacteria that can cause life threatening gastrointestinal infections.

Pelleted diets formulated for cats or kittens have been fed to ferrets in the past before diets were formulated specifically for ferret. These cat and kitten foods can be used in an extreme pinch if ferret food is unavailable, but food commercially made to meet the specific nutritional needs of ferrets is more appropriate and is definitely recommended.

How often should ferrets be fed? Ferrets have a very quick gastrointestinal transit time (the time from eating to defecating) of 3 – 4 hours, so they typically eat and defecate throughout the day. While wild ferrets are very active, running around and burning calories all day long, they can graze on food continuously as they find it without becoming overweight. Pet ferrets, however, tend to be sedentary, sleeping for most of the day until their owners come home from work at night to play with them. Thus, many pet ferrets become obese “couch potatoes.” Consequently, pet ferrets should be fed two meals a day, with occasional low-fat treats in between, to prevent them from gaining excess weight. The one exception to this is ferrets with insulinoma tumors. This tumor commonly develops in a ferret’s pancreases as they age and produces excessive amounts of insulin that drives down their blood sugar, leading to bouts of hypoglycemia and weakness. Ferrets diagnosed with insulinoma should be allowed to graze on food all day long to keep their blood sugar constant and prevent hypoglycemic episodes.

Do ferrets need vitamins? If your ferret is eating a high-quality, premium diet formulated specifically for ferrets, extra vitamins are not needed. In fact, some of the vitamins marketed for ferrets actually contain a great deal of sugar which may be detrimental to them if they have insulinomas.

Safe Treats for Your Ferrets

What are some safe ferret treats? Ferrets love to snack, and ferret owners love to give their ferrets treats. However, while most ferrets enjoy high-carbohydrate treats such as, raisins, fruit, yogurt drops, and pizza crusts, these foods should be avoided, as they contain excessive amounts of sugar which may especially be harmful to ferrets that have insulin-secreting pancreatic tumors. High fat treats, such as dairy products and fatty meat, also should not be offered, as they may lead to diarrhea and contribute to obesity. Ferrets may be given small pieces of commercially available, freeze-dried, meat treats made for ferrets, or they can be offered small bits of low fat, cooked meat, such as chicken, turkey, or other protein. Meats processed with extra salt or spices should be avoided, as these also can contribute to gastrointestinal upset and bloating. Remember, even with “safe” treats, the motto holds – everything in moderation.